SMS Comics was a research project conducted at Nokia Research Center in Palo Alto in 2008-2009 together with Vidya Setlur. The goal of SMS Comics was to augment text messages with contextual information. Instead of being represented as a sequence of texts, text messages are displayed as images composed of several graphical elements: an image representing the place where the person sent the text message from, a picture of the sender and the receiver, and an image depicting the topic of conversation.

I developed most of the backend system and the mobile client application.

The mobile client was developed with Python For Series 60 and could be run on Nokia phones such as the N95. The client was responsible for detecting when the user wrote or received a text message, and then captured that text message, the name of the contact, and other contextual information such as the time and location. This information was processed on a backend server to transform it into an image, retrieved by the mobile client to be viewed by the user. 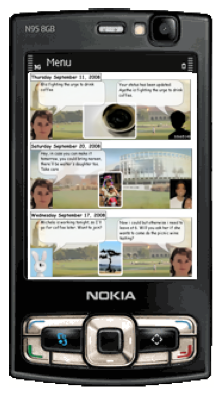 View of the SMS on the mobile client

Example 2: 'Did you feel the earthquake?' 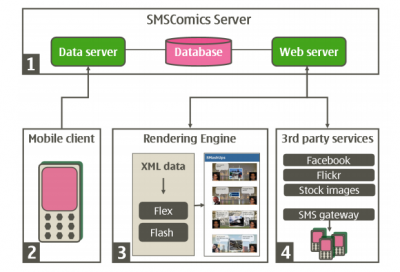 Overview of the backend system: the server receives requests from the mobile clients, and creates the SMS comics images. The creation of each SMS comic is distributed asynchronously across several virtual machines to speed up the process.

The most important tasks carried by the backend system were: 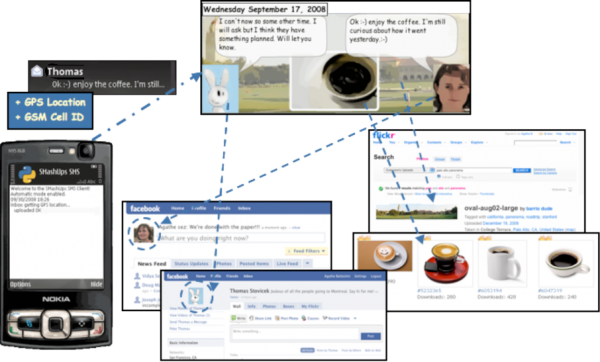 The pieces to create an SMS comic

The most time-consuming tasks were to fetch from 3rd party services (Flickr, stock image service, Facebook) and filter those images until one or several images were found. Upon reception of new data from mobile clients, the requests were processed asynchronously across several instances of virtual machines: one VM for the frontend website and communication with the mobile clients, one VM for Flickr searches, one VM for Stock images searches. Communications between the processes on the VMs were coordinated via Erlang node servers and Python processes.

I integrated different scripts and components developed by Vidya: the Flash/Flex component to create the final image, the scripts to automatically crop profile images around the face, determine if an image has a prominent object in it, and the comic-stylized rendering of images.